SEOUL, Dec. 8 (Yonhap) -- The government's 2018 anti-smoking budget has been set at a level similar to this year as parliament has reinstated a previously cut amount, the welfare ministry said Friday.

The finance ministry had originally cut the budget by more than 13 billion won during an inter-ministry consultation process, but the parliament decided to reinstate the reduced amount amid growing public criticism the state is shirking its responsibility despite sharply increased revenue stemming from higher cigarette prices.

The welfare ministry has given a sigh of relief as it has to carry out a variety of anti-smoking programs amid the nation's rising smoking rate due to the waning effect of the price hike. 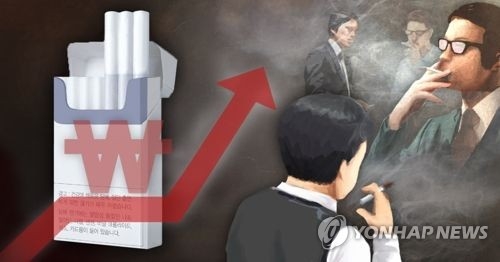 In January 2015, the government hiked the price for a pack of cigarettes by 2,000 won, insisting the higher cost will encourage smokers to kick the habit.

But a recent survey showed that the smoking rate among adult men in South Korea fell to 39.4 percent in 2015, but it rose back to 40.7 percent last year.

The fund should be spent first on enhancing the health of smokers and related groups who pay the fees, but the government has been under fire for using it for other purposes. According to government statistics, about 5 percent of the fund has been earmarked for anti-smoking programs.
(END)