SEOUL, Dec. 8 (Yonhap) -- LG Display Co. said Friday it will tap deeper into the organic light-emitting diode (OLED) light business by launching the new brand Luflex as it announced the operation of a new production facility.

The South Korean display maker said the launch follows the operation of the world's largest OLED light production line, located in the industrial city of Gumi, about 260 kilometers southeast of Seoul.

LG said OLED lights are competitive as they are power-efficient and generate less heat. As they are also light, the products can be applied on various designs, it added.

LG Display said the new fifth-generation factory is capable of producing 15,000 units of panels per month, which is significantly higher than 4,000 units posted by the previous second-generation line.

LG Display hinted automotive companies are already expressing interest in applying its OLED lighting products in their automobiles. It also plans to gradually expand the scope of release throughout different industries down the road.

Citing the data compiled by IDTechEx, LG Display said the global market for OLED lighting panels will rise 52 percent annually for the next 10 years, reaching US$2.2 billion in 2026. 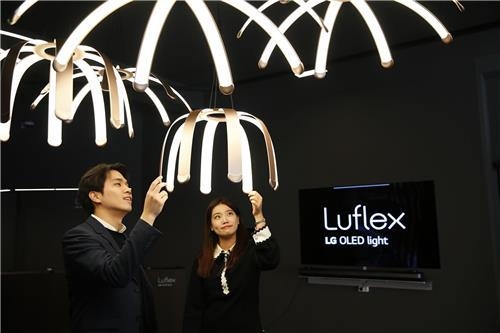