In a survey conducted by Gallup Korea, 74 percent of 1,005 adults surveyed said they approved of the way the president managed state affairs, down 1 percentage point from a week earlier. 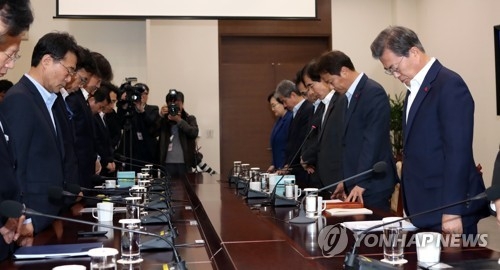 The weekly poll was conducted from Tuesday through Thursday. It had a margin of error of 3.1 percentage points.

Those who said they disapproved of Moon's management of state affairs accounted for 18 percent of all respondents, up 1 percentage point from the previous week.

The ruling Democratic Party also suffered a setback. Its approval rating slipped 1 percentage point on-week to 46 percent, while that of the main opposition Liberty Korea Party dropped at the same rate to 11 percent.

The splinter conservative Bareun Party's approval rating came to 8 percent, with that of the liberal People's Party remaining unchanged at 5 percent.