SEOUL, Dec. 8 (Yonhap) -- Police said Friday they raided the Seoul headquarters of the National Tax Service (NTS) as part of a probe into allegations that the owner family of Samsung Group has additional financial accounts under borrowed names other than the ones revealed during a 2008 special prosecution probe into Samsung chief's slush funds.

The raid comes after a Samsung official told the police that he reported to the NTS' Seoul unit in 2011 about the bogus bank accounts, the police said. The search is to verify the official's testimony, and the tax agency is not the subject in the investigation.

Police believe that the accounts, created under names of Samsung executives at either a bank or a brokerage firm, might have actually belonged to the controlling Lee family of the tech giant all along, with the bulk of them possibly owned by the group patriarch Lee Kun-hee.

Police said they plan to find out whether any of the funds were used in connection with the leadership transfer to Lee's only son Jae-yong from the chairman, who's been bedridden since 2014 after suffering a heart attack.

The younger Lee has been standing a bribery trial in relation to the massive corruption scandal that led to the ouster of then-President Park Geun-hye in March.

In 2008, a special counsel for Lee's slush fund probe found that he had run over a thousand accounts worth over 4 trillion won, disguised as being owned by as many different names. Lee received a suspended sentence with a 110 billion-won fine later that year on charges of breach of trust and tax evasion. 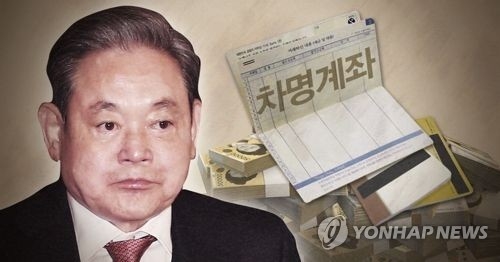