NAJU, South Korea, Dec. 8 (Yonhap) -- The head of the Korea Electric Power Corp. stepped down Friday, shortly before the end of his five-year term, after getting the state-run utility firm a step closer to securing a nuclear project in Britain.

Cho Hwan-eik announced his decision to step down after KEPCO was selected as the preferred bidder of Toshiba Corp. on Wednesday. The project calls for the construction of two nuclear reactors in Moorside, northwest England.

"KEPCO's beating (China Nuclear General) in the competition will give a boost to South Korea's nuclear export bid," Cho said during a retirement ceremony held at KEPCO headquarters in Naju, 355 kilometers south of Seoul. He also stressed the need to maintain a competitive edge in the global market. 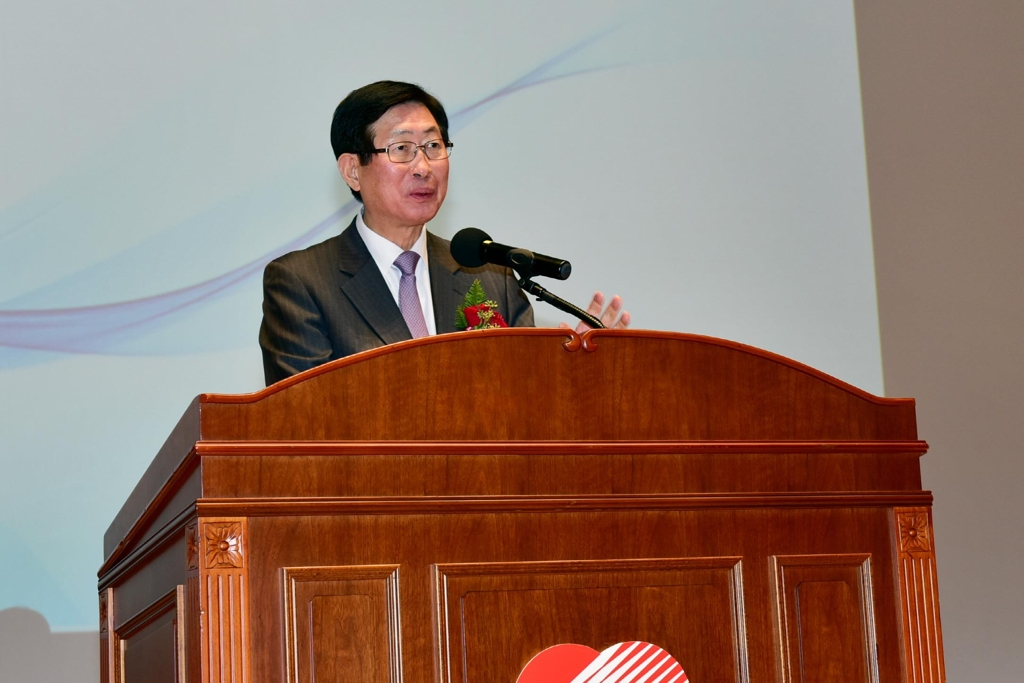 The Japanese industrial giant has a 100 percent stake in the NuGen consortium in charge of building the nuclear power plant in Britain after Engie of France pulled out of the project earlier this year.

The former vice minister of trade, industry and energy took KEPCO's top post in December 2012 and won a second term that was set to end in March, but he offered to step down ahead of his term over health issues.

If finalized, it would be the second overseas project won by KEPCO after the US$20 billion deal in 2009 to build four commercial reactors in the United Arab Emirates (UAE).

"The Moorside project is risky because KEPCO has to come up with financial solutions, unlike the UAE project that only involves the construction of nuclear reactors," the 67-year-old said in a phone interview with Yonhap News ahead of the ceremony

Despite such challenges, Cho said closing the deal would create a "bridgehead" to export indigenous nuclear reactors abroad.

"If we succeed in Britain, it would provide enormous leverage in other countries," he said.

NuGen expressed hope for KEPCO's selection, though the two sides will have to continue talks on details of the project to clinch the deal.

"On funding, they've got a balance sheet that's prepared to support their technology, and they've got strong Korean institutions that they'll bring to the table to help with the funding," Samson was quoted as saying by World Nuclear News, adding, "They are here to stay."

Samson also said KEPCO's track record in the UAE project provides "compelling evidence" that it would "deliver the next generation of new nuclear on time and on budget to the highest standards of quality and safety."