"Next year's most pressing task is to create jobs, and in order to provide more employment opportunities, large firms and smaller firms both are important," Finance Minister Kim Dong-yeon said in a meeting with Park Yong-maan, chairman of the Korea Chamber of Commerce and Industry.

The minister said he will start meeting businessmen next week to hear what they want, signaling that the government will communicate with large-sized firms, or family-run conglomerates.

Park said businesses want some hurdles that are holding them back cleared or lowered.

Local businesses have expressed concerns over President Moon Jae-in's labor policies, claiming any radical steps will have an adverse impact on the nation's economy and the job market.

According to data compiled by researchers and business organizations, Moon's labor policies, including sharply increasing the minimum wage, are expected to cost local firms up to 100 trillion won (US$89.6 billion) annually.

The Moon administration has decided to raise the minimum wage to 7,530 won per hour next year, marking the sharpest hike in nearly two decades. 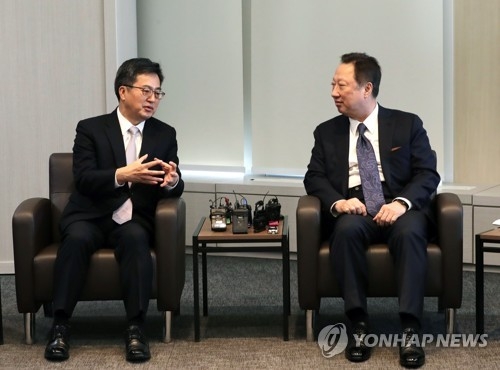