WASHINGTON, Dec. 7 (Yonhap) -- The United States would still be open to having dialogue with North Korea if the regime stopped its weapons testing and stated its willingness to hold talks, Washington's envoy on its nuclear issue said Thursday.

Tensions rose again after North Korea last week launched a new intercontinental ballistic missile it said was capable of striking all parts of the U.S. with a nuclear weapon.

The launch broke a 75-day lull in testing that had raised hopes for a resumption of dialogue between Washington and Pyongyang. U.S. Special Representative for North Korea Policy Joseph Yun had earlier stated that 60 days without testing would send a signal for talks with Washington. 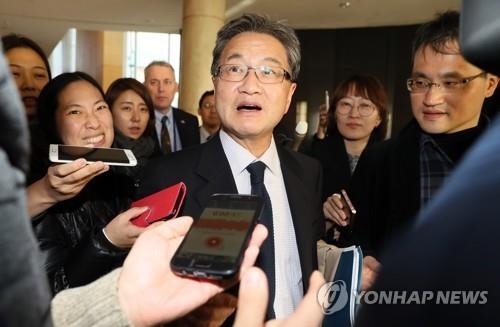 "I think, regarding 60 days or any number of days, we made it clear. Secretary (of State Rex) Tillerson has made it clear that a good first step for North Korea would be to stop testing nuclear devices and missiles. And then we are open to holding a dialogue," Yun said at an event co-hosted by the Korea Foundation and the George Washington University Institute for Korean Studies.

"But of course, diplomacy is not about operating blind. When you stop testing, for example, you really ought to tell us you are stopping testing because you want a dialogue. Otherwise, we're not into reading tea leaves and saying: Why are they stopping testing?" he said.

The U.S. has made diplomatic outreach to North Korea, according to Yun. The ambassador has also spent a lot of time talking to officials there through his own channel.

"It's very important to state your intentions. And then, I do believe if they stop testing for a period of time and told that to us, then I think it would open some space for dialogue," the envoy said.

U.S. still open to dialogue with N.K. after pause in weapons testing: envoy

U.S. still open to dialogue with N.K. after pause in weapons testing: envoy