South Korea's No. 1 mobile game developer and publisher said Lineage 2: Revolution, a mobile MMORPG game licensed by NCSoft and developed by Netmarble, got the award in its home country on Thursday and previously won similar awards in Taiwan, Hong Kong, Thailand, Malaysia and Singapore on Dec. 1.

Lineage 2: Revolution became the top-grossing app in Apple's App Store in South Korea and the five other countries in just eight days after its debut in June.

It also debuted in Japan in August and 54 North American and European countries in November.

Sales of the mobile role-playing game came to 1.8 trillion won (US$1.61 billion) during the January-September period, a company official said, expecting annual sales to surpass 2 trillion won for the whole year.

Netmarble's revenue from overseas markets accounted for 71 percent of its total sales during the July-September, buttressed by the growing popularity of Lineage 2: Revolution abroad.

Lineage 2: Revolution has generated about half of Netmarble's total revenue for the past few months. 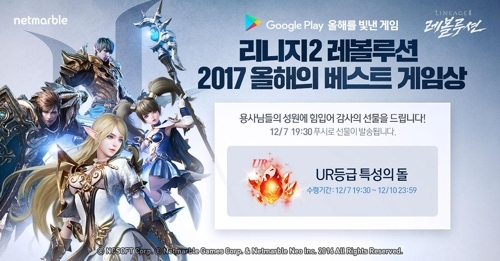