The next International Diabetes Federation (IDF) Congress will be held at the Busan Exhibition & Convention Center (BEXCO) in the port city, located 453 kilometers southeast of Seoul, from Dec. 2-6, according to the Korea Tourism Organization (KTO).

Founded in 1950, the Brussels-based federation is a nonprofit organization seeking to increase awareness of diabetes and to promote care, prevention and cure of the disease. It has hundreds of member organizations from some 170 countries.

The congress is the largest academic fair related to diabetes in the world, with some 15,000 guests, including 10,000 foreigners, estimated to visit South Korea during the period, according to the KTO.

The upcoming gathering will mark the third time for an Asian country to host the event, following India in 1976 and Japan in 1994, the KTO said.

The Busan branch of the tourism promotion agency said the international event is expected to incur 63.7 billion won (US$58.29 million) worth of production and create some 660 new jobs. 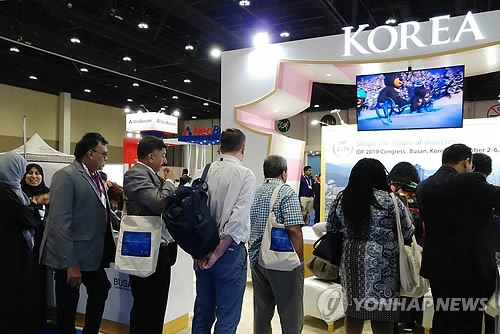