SEOUL, Dec. 8 (Yonhap) -- South Korea's parliament passed a bill Friday to raise the local tax on heat-not-burn (HNB) tobacco products amid a dispute over whether they should be treated differently from conventional cigarettes.

The revision bill calls for increasing the local consumption tax rate for such products -- such as Phillip Morris' iQOS and British American Tobacco's Glo -- to 89 percent of the tax levied on ordinary cigarettes.

Last month, the National Assembly passed a bill to raise the individual consumption tax for HNB tobacco products to 529 won from the previous 126 won.

Also on Friday, the Assembly approved a revision bill that calls for conducting research on faults beneath the Korean Peninsula as part of efforts to better handle earthquake risks.

The bill's passage came after a 5.4 magnitude earthquake struck the southeastern city of Pohang last month, causing dozens of injuries and forcing thousands of people to leave their homes. 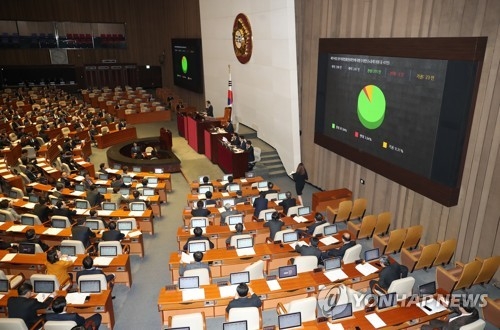