SEOUL, Dec. 8 (Yonhap) -- Prosecutors said Friday they have filed for an arrest warrant for Jun Byung-hun, former senior secretary to President Moon Jae-in, for a second time over a bribery scandal involving his former aides.

The Seoul Central District Prosecutors' Office investigating the case said they filed for a writ against Jun on charges of bribery, embezzlement and abuse of power.

The second request by the Seoul prosecution comes about a week after its previous application for a writ against Jun was turned down by a court on the basis of his presenting a low risk of fleeing or destroying evidence.

The former senior secretary for political affairs is accused of forcing two local home shopping channels to donate 480 million won (US$439,000) between 2013 and 2015 to the Korea e-Sports Foundation, of which he was then an honorary chief. He resigned last month over the scandal.

Prosecutors believe the money was given in exchange for favors involving the renewal of the home shopping networks' broadcasting licenses. Jun was at the time a three-term lawmaker belonging to the parliamentary committee in charge of related policies.

They laid fresh charges against him that he pressured the finance ministry last year to allot a 2 billion-won budget to the e-sports body.

They suspect that he received gift vouchers worth millions of won from Lotte Homeshopping and gave them to his family to use, and also that he was involved in the money laundering of 500 million won led by his two former aides, who have been arrested over similar charges.

Jun was again questioned by the prosecution on Monday. He has flatly denied any wrongdoing. 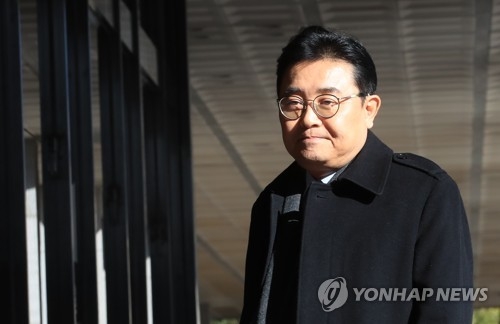