SEJONG, Dec. 8 (Yonhap) -- The Ministry of Oceans and Fisheries said Friday it will punish two senior officials in charge of searching the wreck of the ill-fated Sewol ferry who withheld information on the discovery of human remains.

Lee Cheol-jo, the chief of Sewol ferry search team, and Kim Hyun-taek, the team's second in command, were stripped of their duties last month after it was revealed they had kept secret the finding of bone pieces on Nov. 17 from the victims' families. They came under fire for trying to put an early end to the search, which had been under way since March.

"They didn't immediately notify the discovery of the bones to the families who were unable to recover remains of their loved ones, and delayed reporting the fact to the minister," the ministry said in a release.

Though the officials were late in filing the report, the ministry claimed they didn't intentionally conceal the search results.

A DNA analysis showed that the bone fragments belonged to a woman whose family held a funeral for her last month, after receiving part of her remains in May. 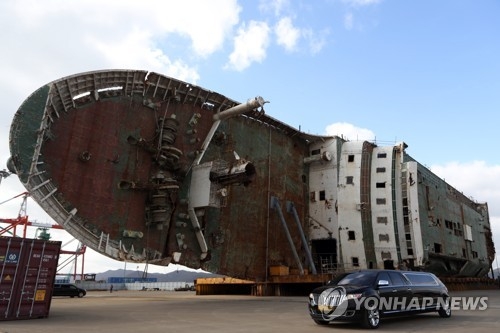 The discovery came a day after the families of five victims who are still missing gave consent to halt the search, raising suspicions that they feared that the finding could spark calls for the continuation of the operation.

The 6,800-ton Sewol sank on April 16, 2014, in waters off the country's southwest coast, claiming the lives of 304 people, most of them teenage students on a school trip. It is one of the worst maritime tragedies in South Korean history.

Three years after the sinking, salvage experts raised the ship from the water and moved it to Mokpo port, 410 kilometers south of Seoul, to facilitate the further search for remains.

Two officials to be punished over sunken ferry search

Two officials to be punished over sunken ferry search