SEOUL, Dec. 8 (Yonhap) -- The minor opposition People's Party decided Friday to suspend a senior member over allegations that he is the source of a tip-off that sparked a 2008 slush fund scandal involving the late former President Kim Dae-jung, who is revered by the party's supporters.

The man at the center of the allegations is Park Joo-won, a member of the party's Supreme Council. The suspicion that he may have blown the whistle on the slush fund enraged key party members, who still feel loyal to Kim. The late leader remains a liberal icon and has a strong following in the country's southwestern region, the party's political bastion.

The party decided to suspend Park's party membership and dismiss him from the Supreme Council, party officials said.

The allegations erupted this week after a newspaper reported that Park, then a prosecutor, gave the tip-off to Joo Seong-young, then a ruling party lawmaker.

During a parliamentary session in October 2008, Joo called for an investigation into suspicions that Kim might have raised the slush fund. Joo was later convicted of defamation and fined 3 million won (US$2,742).

Park denied the allegations, saying he would seek legal measures such as filing a defamation complaint.

"I express disappointment and deep regret over this fake news," he told reporters.

Park is a close aide to Ahn Cheol-soo, the party's chairman. Thus, the allegations are expected to pose a challenge to Ahn's campaign to strengthen internal cohesion and foster unity among middle-of-the-road politicians, observers said. 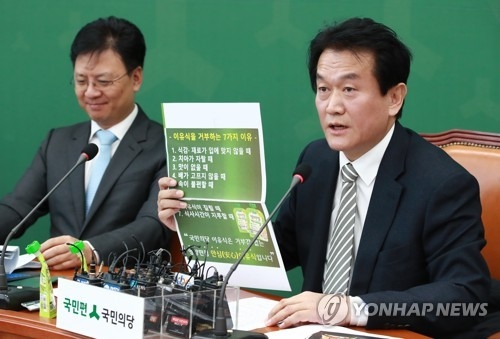