WASHINGTON, Dec. 8 (Yonhap) -- The United States' envoy on North Korea's nuclear program will travel to Japan and Thailand next week to seek a joint response to the regime's latest missile test, the State Department said Friday.

"The United States looks forward to continuing its partnership with both these nations so that the DPRK will return to credible talks on denuclearization," the State Department said in a statement, using the abbreviation for North Korea's official name, the Democratic People's Republic of Korea.

North Korea has claimed the latest test was of a new intercontinental ballistic missile capable of striking anywhere in the U.S. with a nuclear weapon. The launch broke a 75-day lull in testing that had raised hopes for a resumption of dialogue between Washington and Pyongyang. Yun had earlier stated that 60 days without testing would send a signal for talks with Washington.

Speaking to reporters Thursday, the envoy said the U.S. would still be open to having dialogue with the North if it stopped its weapons testing and stated its willingness to hold talks.

"So far, I can report no real progress on diplomatic engagement," he said, noting that he has spent a lot of time talking to North Korean officials through his own channel.

"So really, when there is no progress in diplomatic engagement despite us having reached out, there is no choice but continued pressure policies," he added, referring to economic sanctions and diplomatic isolation. 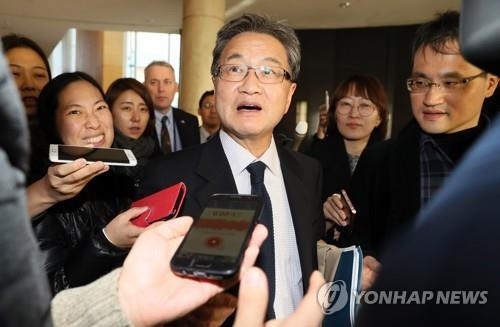