Yun won the fourth leg of the International Bobsleigh & Skeleton Federation (IBSF) World Cup in Winterberg, Germany, on Friday (local time) with a time of 56.62 seconds, beating his rival Martins Dukurs of Latvia by 0.06. Dave Greszczyszyn was third with 56.88.

Originally, winners were to be determined after two runs, but due to heavy snow, IBSF decided not to race the second heat, which made Yun the top finisher.

This was Yun's third World Cup gold medal in the 2017-18 season. He won his first in Park City, Utah, on Nov. 18 and another in Whistler, Canada, on Nov. 25. The 23-year-old also has a silver from the season opener in Lake Placid, New York.

Yun extended his record of being the first Asian to win consecutive skeleton World Cup gold medals. He also maintained his top position in World Cup rankings this season with 885 points, 64 points above Dukurs.

Yun's next destination will be a World Cup race in Innsbruck, Austria, on Dec. 15.

Yun is widely viewed as South Korea's best skeleton medal hope at the 2018 Winter Games on the home track in PyeongChang. 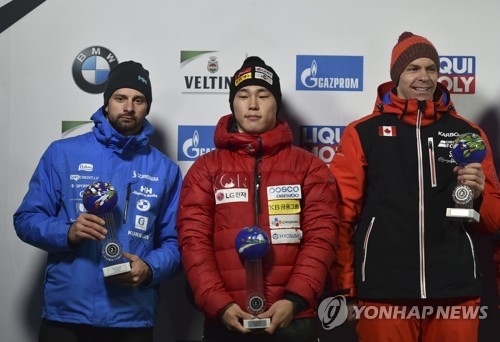