North Korea said that the visit of Jeffrey Feltman, the undersecretary general for political affairs at the U.N., helped the communist nation and U.N. understand each other deeply, and the two sides agreed to have regular communications at various levels, according to the Korean Central News Agency (KCNA).

"Recognizing that the present visit of the UN under-secretary-general contributed to deepening the understanding between the DPRK and the UN Secretariat, both sides agreed on putting the communication through visits at different level on a regular basis in the future," the KCNA said. DPRK is the abbreviation for North Korea's official name, the Democratic People's Republic of Korea.

Feltman arrived in Pyongyang on Tuesday for a four-day visit. He met North Korean Foreign Minister Ri Yong-ho and visited U.N. project sites amid heightened tensions sparked by the North's Nov. 29 test of a new intercontinental ballistic missile that it claims is capable of striking anywhere on the U.S. mainland.

The KCNA reported that North Korea told U.N. officials that current situation on the Korean Peninsula is due to the United States' threat and its wish to launch a nuclear attack against North Korea first.

The U.N. officials responded that they will help ease tensions on the Korean Peninsula by following the U.N. Charter, which states the organization's mission of maintaining international peace and security, the KCNA added.

According to the KCNA, Feltman recognized international sanctions against North Korea are having a negative influence on humanitarian aid there. He visited a children's food factory and a hospital in Pyongyang on Thursday.

"The U.N. undersecretary general expressed his intention to strive for cooperation in keeping with the humanitarian mission," the KCNA said. 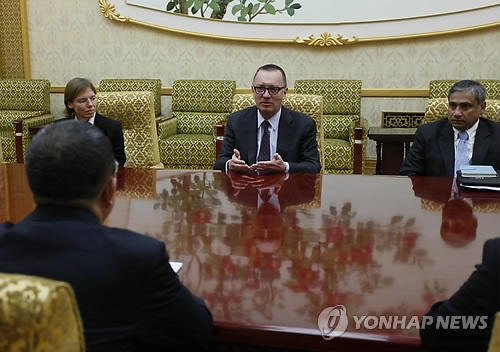