Citing a spokesperson of the North's Ministry of Foreign Affairs, the Korean Central News Agency (KCNA) reported that Trump's decision to recognize Jerusalem -- which it referred to as Kuds, based on its Arabic name -- as Israel's capital deserves an international outcry.

"The decision by U.S. president Trump to recognize Kuds as the capital of Israel and to move the U.S. embassy there well deserves a global condemnation and rejection as it is an open defiance of and an insult to the international legitimacy and to a unanimous will of the international society," the North's state-run KCNA reported.

North Korea said the U.S. decision isn't surprising considering what Trump has done, adding that countries around the world would know "the true colors of the U.S."

"This decision of the U.S. is not so surprising as it came from a dotard who had cried out for 'total destruction' of a sovereign state at a sacred U.N. forum," the KCNA said. "The U.S. should bear full responsibility for all the consequences of tension and instability that will be entailed in the Middle East region owing to its reckless and highhanded act."

North Korea said the Jerusalem issue should be solved "fairly by means of regaining the national rights of the Palestinian people."

"We, out of our external ideas of independence, peace and friendship, condemn strongly the U.S. action this time and express our firm support and solidarity with the Palestinians and other Arabian people in their just cause to regain their legitimate rights," the KCNA said. 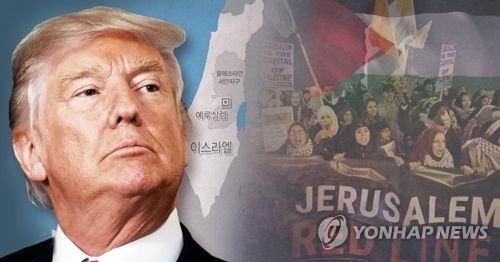