TOKYO, Dec. 9 (Yonhap) -- South Korea were held to a 2-2 draw by China in the opening game of an East Asian football tournament in Tokyo on Saturday.

South Korea blew a 2-1 lead late in the second half and settled for one point to kick off the East Asian Football Federation (EAFF) E-1 Football Championship at Ajinomoto Stadium in Tokyo.

South Korea will next face North Korea on Tuesday, and then close out the four-nation competition with a match against Japan next Saturday. All matches will be at Ajinomoto Stadium.

South Korea are the defending champions of the biennial event. 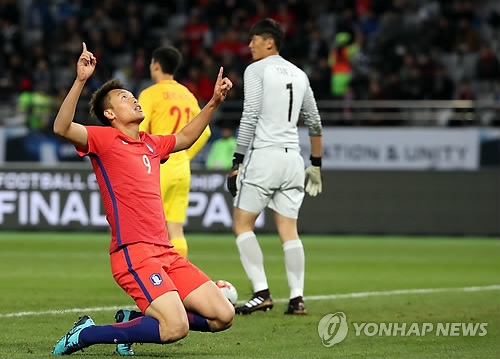 The Taeguk Warriors got off to a shaky start against China, allowing Wei Shihao to score the opening goal just nine minutes into the contest.

The teammates from the K League Classic champions Jeonbuk Hyundai Motors connected again for the go-ahead goal, with Lee being the beneficiary of Kim's headed pass in the 19th minute.

South Korea nearly went up by two goals near the end of the first half. Yeom Ki-hun's corner kick in the 44th bounced off a body and landed by Lee Myung-joo, but goalkeeper Yan Junling denied the South Korean midfielder from point-blank range.

The teams traded few serious chances in the second half, but in the 62nd minute, South Korean goalkeeper Kim Jin-hyeon made a spectacular save to keep his team ahead.

Left alone right at the goalmouth, Zhao Xuri deftly redirected a Deng Hanwen cross from the right side, but Kim punched it out of harm's way at the last moment.

China continued to increase pressure on the offense and finally got their equalizer in the 76th minute, when Yu Dabao headed in Li Xuepeng's cross from the left flank.

Yu jumped over multiple defenders and found the top left-hand corner of the net, leaving Kim Jin-hyeon virtually frozen to his spot. 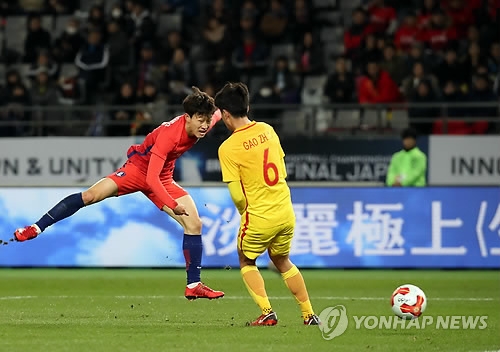 South Korea appeared to run out of gas at both ends in the second half and failed to mount much of an attack after Yu's header.

South Korea now have 18 wins, 13 draws and two losses all-time against China. South Korea lost their previous showdown against their larger neighbor 1-0 during the final Asian qualifying round for the 2018 FIFA World Cup in March.

The E-1 Championship isn't part of FIFA's international match calendar, and European clubs weren't obliged to release their international players for this competition. South Korean head coach Shin Tae-yong was left to assemble his team with players from South Korean, Chinese and Japanese leagues. The E-1 is one of the last opportunities for such players to make their case to be on next year's World Cup squad. 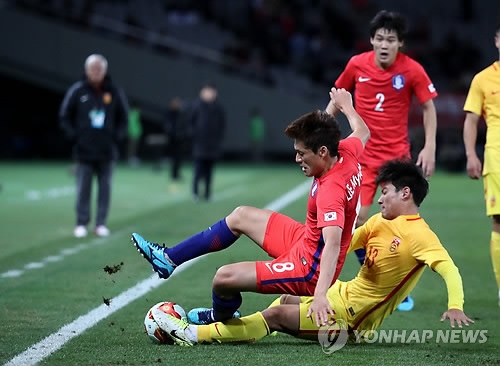