TOKYO, Dec. 9 (Yonhap) -- South Korean men's football head coach Shin Tae-yong expressed his disappointment with a poor defensive effort in a draw against China at a regional tournament in Tokyo on Saturday.

South Korea settled for a 2-2 draw with China in the opening match of the East Asian Football Federation (EAFF) E-1 Football Championship at Ajinomoto Stadium in the Japanese capital.

South Korea allowed the opening goal before taking a 2-1 lead with two unanswered goals. But Shin's players visibly tired in the second half as China ratcheted up their offensive pressure, which resulted in Yu Dabao's 76th-minute equalizer.

Shin said South Korea should have won this match. 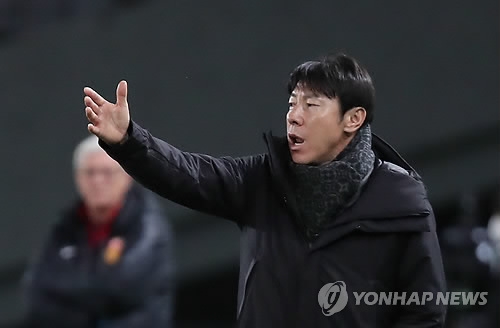 "We weren't able to convert several good scoring chances in the first half, and then gave up the equalizer in the second half," he said in a post-match press conference. "I am deeply disappointed. You're bound to give up goals in football, but I think our defense let in goals way too easily. The defenders looked sluggish as a unit."

Shin said he liked the way his players applied some strong forechecking early, but their passes were off the mark too often. Defensive positioning also left much to be desired, the coach said.

South Korea are the defending champions of this biennial competition. They'll next face North Korea on Tuesday then finish the tournament with a match against Japan next Saturday. All matches will be played at Ajinomoto Stadium.

"We didn't play our game in the second half and let the opponents take control with counterattacks," Shin said. "We must make sure we stay focused for the entire 90 minutes."