SEOUL, Dec. 9 (Yonhap) -- North Korea claimed itself to be a bastion of human rights in a white paper released Saturday, defying international criticism of its long-standing abuses.

The state-run Korean Central News Agency (KCNA), monitored in Seoul, reported that the Human Rights Institute of the DPRK Academy of Social Sciences issued a white paper Saturday that attempts to "clarify who has defended human rights and who has violated them." DPRK is short for North Korea's formal name, the Democratic People's Republic of Korea.

According to the KCNA's English-language report, the white paper states: "The DPRK is a country where genuine human rights are firmly protected and successfully put into practice as the working masses' democratic freedom and rights are most thoroughly defended and most brilliantly realized."

The report said the white paper also slammed the United States for "styling itself a human rights judge" while finding fault with human rights records in other nations and accused Washington of trying to justify its own human rights violations.

The paper then argued the only way to defend sovereignty and human rights is to bolster the military force.

Less than a month ago, the United Nations' Third Committee, which oversees humanitarian issues, adopted a resolution calling for stepped-up efforts to improve human rights conditions in North Korea. The U.N. Commission of Inquiry's landmark 2014 report details abuses ranging from torture and rape to public executions and retaliation against asylum seekers repatriated from abroad. 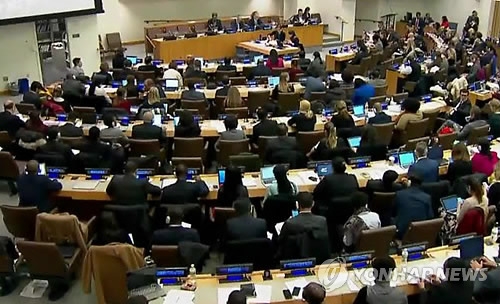 N. Korea claims to be bastion of human rights in white paper

N. Korea claims to be bastion of human rights in white paper