On Saturday, three workers were killed and four others were seriously injured after a 90-meter-tall crane collapsed at a construction site in Yongin, Gyeonggi Province, at 1:11 p.m.

The Yongin Eastern Police Station announced that it plans to conduct a joint forensic investigation at the site with the National Forensic Service, the Ministry of Employment and Labor, and Yongin city officials at 2 p.m.

Investigators will look into what caused the accident and whether the workers followed safety measures at the construction site. The crane was imported approximately a year ago, but when it was actually made has not been confirmed.

Authorities will also examine whether there were communication problems between the crane operator and the on-site towerman.

"We'll examine the broken crane mast and its materials to find out the cause of the accident. Also, if we find any negligence regarding safety at the site, we plan to charge those who are responsible," an official at the Yonin Eastern Police Station said. 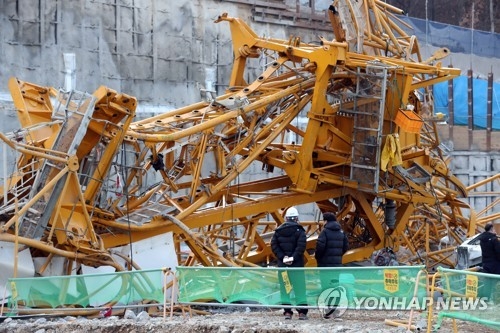