The shipments of the Trax SUV are expected to exceed 250,000 units for the whole of this year, leaving Hyundai Motor Co.'s Tucson SUV behind at 190,000 units, an industry official said.

Hyundai Motor's Avante compact and Accent subcompact ranked third and fourth, respectively, in terms of exports as of November, according to industry data.

In the January-November period, GM Korea exported 233,503 units of the Trax, up 7.4 percent from a year earlier. Last year, the crossover ranked No. 1 among cars shipped abroad, with the total hitting 240,351 units, the data showed.

The Trax is produced at GM Korea's plant in Bupyeong, just west of Seoul, and exported to about 60 countries. Nine out of 10 Traxes are shipped to Europe and the United States, GM Korea said.

The world's SUV market has shown an average of 2 percent annual growth since 2010 due to the improving economy and low oil prices.

SUV models are to account for more than 30 percent of the world's vehicle sales this year, rising from 29 percent last year and 14 percent in 2010, the company said. 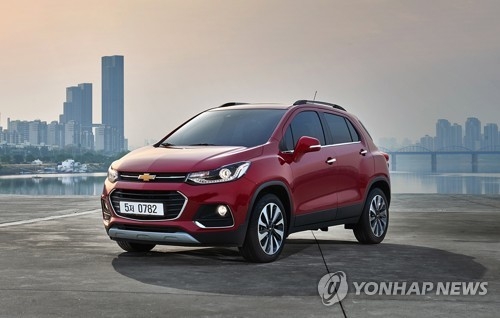