"Gen. Brooks completed a short visit to Washington D.C. and New York where he provided a firsthand account of the situation in Korea and the quality of the ROK-U.S. Alliance" to U.S. leaders and experts, the USFK spokesman Army Col. Chad Carroll said in a statement emailed to Yonhap News Agency.

They include Deputy Secretary of Defense Patrick M. Shanahan and Vice Chairman of the Joint Chiefs of Staff Air Force. Gen. Paul J. Selva, as well as members of the U.S. Congress and major think tanks.

Carroll added the USFK chief, who doubles as the commanding general of the allies' Combined Forces Command, takes his role to educate U.S. leadership about the security situations on the Korean Peninsula "very seriously." 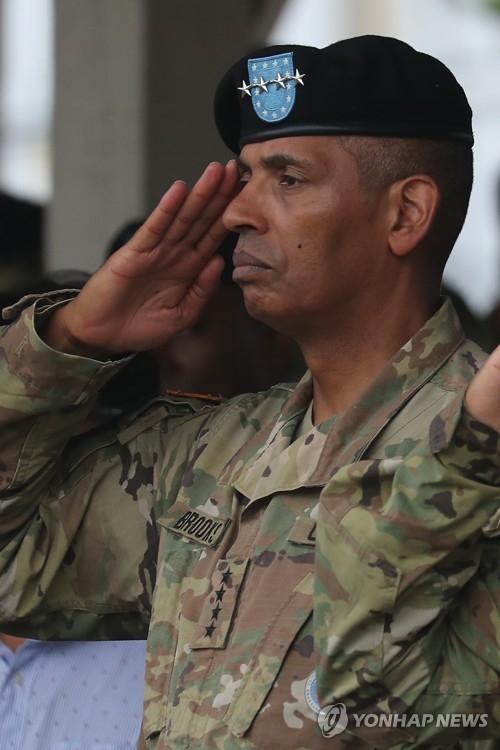 In dealing with the North's continued provocations, Washington officials have stated that all options are on the table, although diplomacy is preferred.

Many South Koreans are concerned that the U.S. may push for a pre-emptive strike on the North.

U.S. Republican Senator Lindsey Graham said publicly that, "We're getting close to military conflict because North Korea is marching towards marrying the technology of an ICBM with a nuclear weapon on top that can not only get to America but deliver the weapon."

The North announced earlier that it has completed its "nuclear force" with the development of the Hwasong-15 missile capable of reaching all of the United States loaded with a super-sized nuclear warhead.

The USFK spokesman's statement is apparently aimed at cautioning news outlets here against reading too much into the commander's latest U.S. visit.