SEOUL, Dec. 10 (Yonhap) -- Thousands of doctors on Sunday staged a rally against the government's extended medicare programs, which they claimed will drive down their earnings.

Some 30,000 doctors gathered in Seoul to protest "Moon Jae-in Care," which is aimed at providing medical services to the general public at reasonable prices under the government's medicare program, according to the Korean Medical Association.

If Moon Jae-in Care is implemented, the profits of hospitals and clinics may be reduced as patients pay less as most treatments will be supported by the national medicare program.

The Moon government expected it will take about 30.6 trillion won (US$27.9 billion) during his five-year term that began in May to push forward the program. 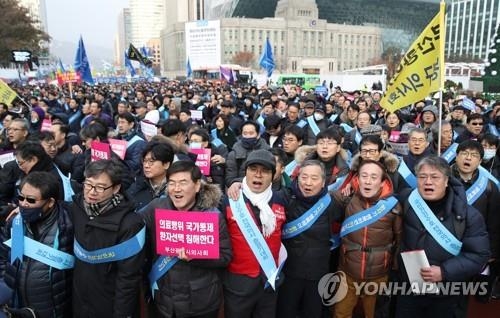