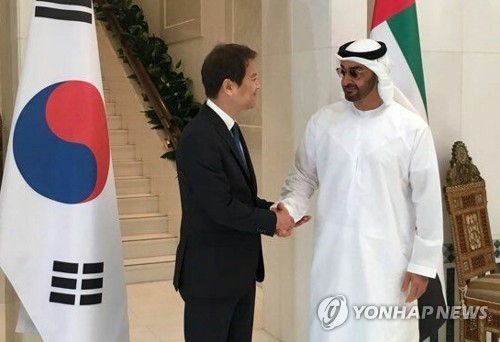 Park said the trip was largely aimed at paying a visit to South Korean troops stationed in the two Middle Eastern countries.

"Im's trip as a special envoy is aimed at checking the site of our peacekeeping activities in the Middle East on behalf of the president and to encourage our service members there," he told a press briefing.

South Korea has maintained a military unit named "Akh," an Arabic word meaning "brother," in the UAE since 2011.

The presidential chief of staff was also scheduled to visit the Dongmyeong unit in Lebanon on Monday, according to the Cheong Wa Dae spokesman.

The Dongmyeong unit currently consists of 330 troops, and is part of U.N. peacekeeping operations there. The country has been operating the unit since July 2007, making it the longest-serving South Korean force abroad.

While in Lebanon, Im will also pay a courtesy call on Lebanese President Michel Aoun.

Im's trip marked the first overseas tour by a presidential chief of staff in the capacity of a special envoy in 14 years, according to the Cheong Wa Dae spokesman.

He will return home Tuesday.
(END)