"The remix version of 'Mic Drop' reached 28th on the main Hot 100 chart. I hope (with our next album) we can reach No. 1 on the Billboard 200 and the top 10 on Hot 100 chart, member Jimin said during a press conference at Gocheok Sky Dome ahead of the band's concert.

Last week, BTS' latest song "Mic Drop" reached No. 28 on Billboard's Hot 100 chart making it the first Korean boy band to join the crucial top-40 list. The group's album "Love Yourself: Her" peaked at No. 7 on the Billboard 200.

"Each week I check the Billboard charts and I'm always amazed. I kept telling myself 'this doesn't make sense,'" member Suga recalled.

Singer Jin said he thought about holding a stadium tour. "Today is the last day of our Wings Tour. I have a big goal of throwing a stadium tour either next year or the year after. The bigger the dream, the better," said Jin.

The group also shared some thoughts about performing at the AMA. "Suga doesn't usually get nervous, but his microphone trembled at the AMA," leader RM said.

"It was a good experience for us as we could perform in Korean not just to our fans but others as well," Jimin said. The AMA was televised live on U.S. television network ABC. He added: "We were grateful for fans cheering for us in Korea, even though it was a U.S. awards show." 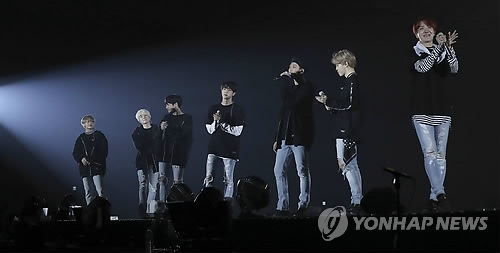