(ATTN: UPDATES throughout with SLBM activity, other details; ADDS photo)

The two-day drill is taking place in waters near the peninsula and Japan, the first trilateral military operation since the North's firing of the Hwasong-15 intercontinental ballistic missile (ICBM) in late November, according to the Joint Chiefs of Staff (JCS).

They are conducting a computer-simulated training to detect and track any ballistic missile fired from the North and share related information, the JCS said. 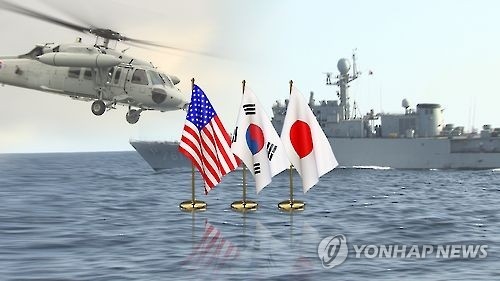 The three-way anti-missile training is the sixth of its kind following the two rounds in 2016 and three others earlier this year.

It came amid news reports of the possibility that the North will fire an upgraded SLBM in the near future.

"(We) are keeping a close eye on North Korea's missile facilities," a defense official here said. "There has been no indication detected of any imminent provocation, but we are fully prepared for a response."