SEOUL, Dec. 11 (Yonhap) -- The number of South Korean tourists to Japan spiked 40 percent in the first 10 months of this year amid a slight rise in Japanese tourists visiting here, data showed Monday.

According to the data by the Korea Tourism Organization (KTO) and its Japanese counterpart, 5.84 million South Koreans visited the neighboring country in the January-October period, compared with 4.17 million during the same period a year earlier.

The figure is well in excess of the 5.09 million South Korean visitors to Japan for the whole of last year and almost triple the number of Japanese tourists to South Korea.

Given the current pace, the number of South Korean visitors to Japan is tipped to surpass 7 million for all of this year.

In the 10-month period, Japanese tourists to South Korea totaled 1.90 million, slightly up from the 1.89 million recorded during the same period a year earlier.

For all of 2017, the number of Japanese visitors to South Korea is expected to edge up 0.8 percent on-year to slightly over 2.3 million. 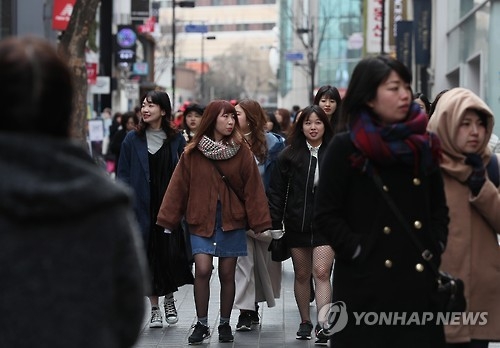 According to a report by the World Economic Forum, Japan's tourism competitiveness ranks fourth in the world after Spain, France and Germany.

Also responsible for the jump in the number of South Korean visitors to Japan were the prolonged weakness of the Japanese currency and South Korea's long holidays in May and October, the sources said.

In contrast, North Korea's missile and nuclear tests have had a negative impact on the number of Japanese visitors to South Korea, they added.

North Korea has launched more than 20 missiles this year and detonated an alleged hydrogen bomb in early September, sharply raising tensions on the Korean Peninsula.
(END)