During a party meeting, Choo Mi-ae also cited a senior U.N. official's recent statement that "time is of the essence" in handling the stalemate, stressing that Seoul needs to craft a dialogue-based strategy to establish peace on the Korean Peninsula.

Amid heightened tensions sparked by the North's Nov. 29 test of an intercontinental ballistic missile, Jeffrey Feltman, the U.N. undersecretary-general for political affairs visited the North last week. After his trip, he pointed out the "urgent need to prevent miscalculations and open channels to reduce the risks of conflict."

"(Feltman's statement) means time is still left, and we have to create a dialogue strategy before it is too late," Choo said. 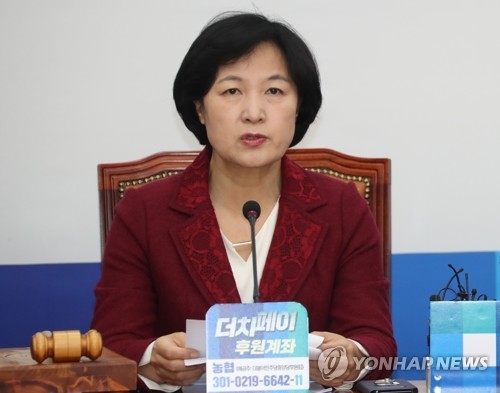 "In order to safeguard our firm principle that there must never be another war on the Korean Peninsula, it is of great importance to make various attempts at dialogue (with Pyongyang). ... Peace is an ultimate value, and a priority that we should emphasize more," she added.

Choo then called the next seven days a "super week," noting a set of diplomatic events, such as Moon's forthcoming visit to Beijing for a summit with Chinese leader Xi Jinping and her trip to Russia for talks with top Moscow officials.

"We will embark on a super week this week to craft a solution to the North's nuclear issue," she said. "Amid tensions in Northeast Asia caused by the North's missile launch, diplomacy with China and Russia is more important than before."