SEOUL, Dec. 11 (Yonhap) -- South Korea confirmed an outbreak of highly pathogenic avian influenza (AI) at a duck farm in the southwestern region and culled 76,000 ducks to prevent the further spread of the virus, the agriculture ministry said Monday.

The H5N6 bird flu was discovered on a farm in Yeongam, 380 kilometers south of Seoul, on Sunday, the Ministry of Agriculture, Food and Rural Affairs said.

It marks the fourth confirmation of highly pathogenic AI this season, following two outbreaks in Jeolla Province and one on the southern island of Jeju last month. 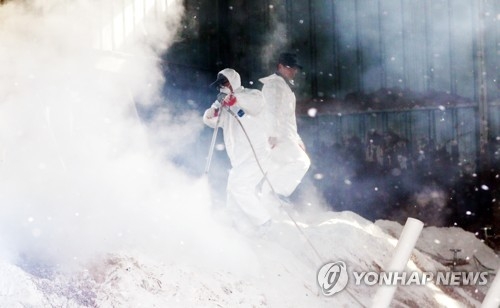 The ministry said 76,000 ducks were slaughtered at five duck farms located within a 3-kilometer radius of the site to prevent a wider spread of the highly contagious virus.

Quarantine officials issued a transportation ban and stepped up disinfection measures at nearby farms, with in-depth inspections into ducks in the region currently under way, the ministry said.

Last year, South Korea slaughtered more than 30 million birds to contain the worst outbreak of bird flu that had hit the country.