BUSAN, Dec. 11 (Yonhap) -- An international art fair ended here Monday after a five-day run, displaying more than 3,000 artworks by 367 Korean and foreign artists, which can be bought on the spot.

The Busan International Art Fair, the 16th of its kind, opened at the Busan Exhibition and Convention Center Thursday with the participation of Busan Mayor Suh Byung-soo and more than 200 dignitaries at the opening ceremony.

This year marks the first time the exhibition invited artworks from galleries in India.

"We think it is more important to introduce good artworks to clients so they can buy them in a satisfactory manner rather than we maintain the direct transaction system alone," said Heo sook, chairperson of the K-Art International Exchange Association, which organized the five-day fair.

The exhibition has 37 booths allocated to the artworks of full members of the Asian Art Academy, 20 booths for rising artists, six booths for Japanese and other foreign artists, and eight booths for artworks from Indian galleries.

K-Art's Heo hoped the exhibition will also pave the way for South Korean artists to introduce their artworks in major Indian galleries, saying, "South Koreans maybe unfamiliar with the Indian artists we've invited, but they are globally recognized masters whose artworks get attention at Sotheby's auctions."

The K-Art International Exchange Association said it has agreed with the Bombay Art Society to organize the 1st Bombay Biennale at the Nehru Convention Center in October next year so the artworks of hundreds of South Korean and Indian artists could be displayed.

Also shown at the BIAF are ceramics by Kim Jung-ok, artworks by Kim Young-sung and Buddhist works by Ven. Geumgang. 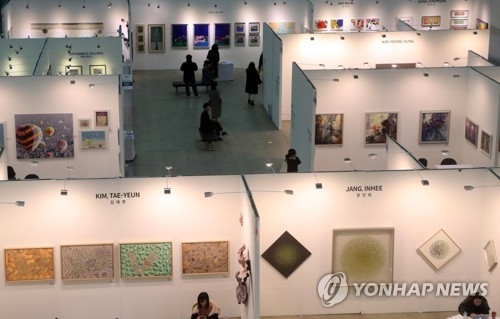