"Opening effective communication channels should be pursued in order to deliver the international community's voice to the isolated and secluded North Korea," Kang said in an international forum on a "Nuclear-Free Korean Peninsula" hosted by the state-run Institute for Foreign Affairs and National Security (IFANS).

"It's (also) crucial to arrange reunions of separated families between South and North Korea and restore a hotline between the military authorities," she also said, stressing the Moon Jae-in government's policy vision to increase engagement with the North.

North Korea's participation in the 2018 PyeongChang Winter Olympics in South Korea would be "a favorable opportunity" in that vein, she also noted.

Kang said the issue of North Korea's nuclear weapons development entered "a new stage" with its long-range ballistic missile launch on Nov. 29 and its declaration of its completion of the state nuclear force. "North Korea's nuclear (weapons) and missiles have now become a direct threat to the whole world, not just a limited threat to the Korean Peninsula and Northeast Asia."

She said the international community will never tolerate North Korea's possession of nuclear weapons and will strengthen diplomacy and pressure to bring the country to the negotiating table.

At the core of South Korea's policy toward North Korea is "a solid South Korea-U.S. (military) alliance," she stressed. The allies are currently in close consultation on ways to increase the frequency of the deployment of U.S. strategic military assets on the Korean Peninsula and beef up South Korea's high-tech defense capabilities, Kang also noted. 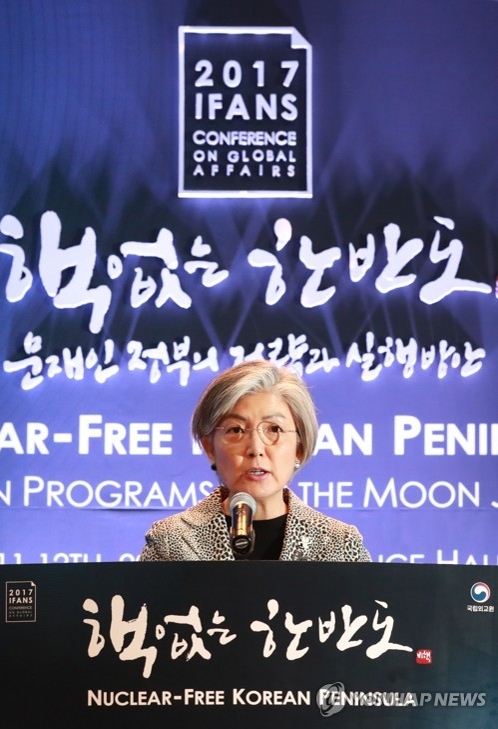 "I am all for using diplomatic and peaceful means to get rid of nuclear weapons throughout the world, especially with respect to North Korea," he told the forum.

Powell analyzed that the survival of its regime seemed to be "the most valuable thing" in its development of nuclear weapons. "They will do whatever is necessary to make sure the regime is sustained and this really is part of the background for solving the problem of nuclear weapons."

"But to use such weapons against the U.S. or against our friends and allies, if we suspect that such weapons are about to be used, we need to make sure Kim Jong-un understands that will be the destruction of his regime, beginning the very next day. ... I think they are too smart to want to commit suicide."

Powell also said that China "has the ignition key to the North Korean car," by providing North Korea with energy and resources that keep the regime afloat.

"I think they have the ability to turn it off," he said, calling for a more active role by China in isolating the regime. 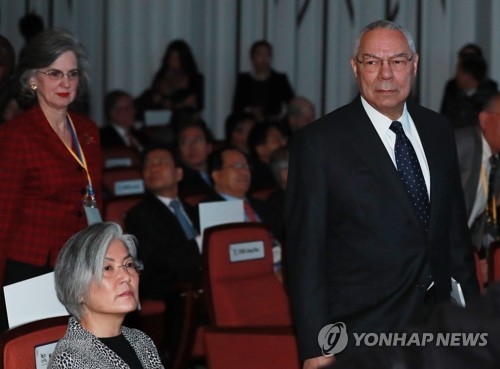 Lee Do-hoon, South Korea's top envoy in negotiating North Korea's denuclearization, later said in the forum that the country will continue to seek opportunities for dialogue as it pursues a peaceful way out of the current nuclear deadlock.

"We will not forget that the ultimate purpose of the sanctions and pressure is to bring North Korea to the negotiating table. Under the dire circumstances, we will continue to seek opportunities for dialogue," Lee said.

There will be a window open for North Korea to discuss issues of "mutual concern" with South Korea if the regime participates in the upcoming Olympics, refrains from any further provocations and communicates its intent to engage in sincere dialogue, Lee suggested, adding that "North Korea must not let this valuable opportunity pass by."