SEOUL, Dec. 11 (Yonhap) -- After his contract talks with the South Korean baseball club Lotte Giants fell through, American pitcher Josh Lindblom slammed the team for "a long history of dishonesty and unprofessionalism" on Monday.

In a message tweeted both in English and Korean, the 30-year-old right-hander thanked fans of the Busan-based Korea Baseball Organization (KBO) club for their support and said those fans deserve honesty.

The Giants announced last Saturday that they weren't able to come to terms with Lindblom for his fourth season. The Giants said Lindblom had asked the club to give up on their reserve rights to him if they couldn't reach an agreement by Nov. 30 -- meaning, Lindblom would still be able to sign with any other KBO club if he wasn't returning with the Giants. The Giants said they granted Lindblom his wish and the two sides continued their talks, before they ended fruitlessly last week.

But in his tweet, Lindblom said many news articles about his negotiations with the Giants "contain very little truth." 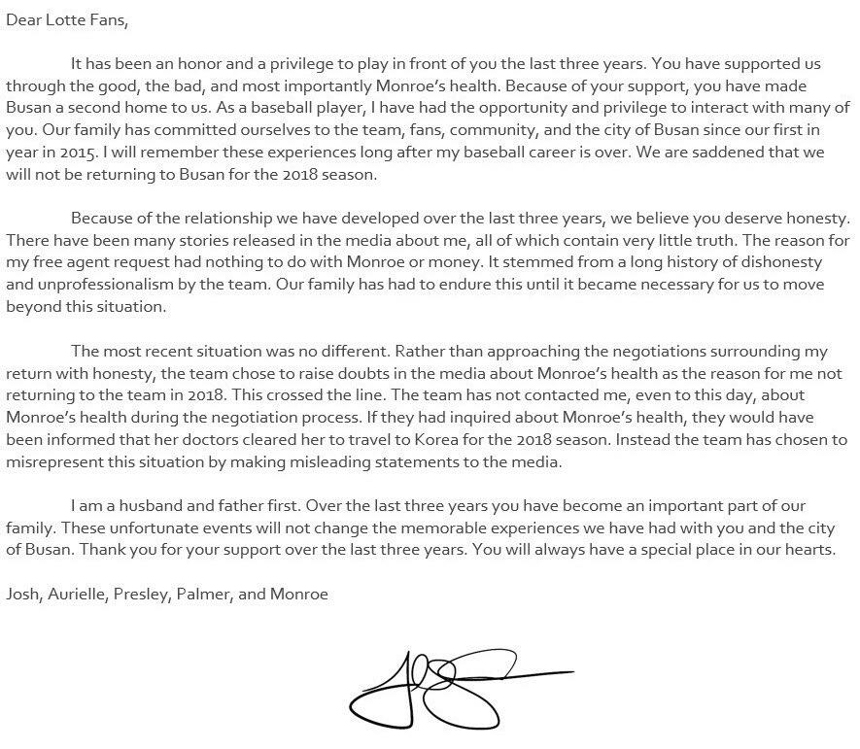 "The reason for my free agent request had nothing to do with Monroe or money," Lindblom said, in reference to his young daughter. After the 2016 season, Lindblom returned to the United States to better take care of Monroe, who was diagnosed with a heart defect before birth and underwent her first open heart surgery in the U.S. Lindblom rejoined the Giants in July this year after Monroe's health improved.

"(The decision to request free agency) stemmed from a long history of dishonesty and unprofessionalism by the team," Lindblom added.

Lindblom said the Giants didn't approach the negotiations on his re-signing with honesty but instead "chose to raise doubts in the media about Monroe's health as the reason for me not returning to the team in 2018." It's an act that "crossed the line," Lindblom said, because he is a husband and father first, before he's a ball player.

"The team has not contacted me, even to this day, about Monroe's health during the negotiation process," the pitcher went on. "If they had inquired about Monroe's health, they would have been informed that her doctors cleared her to travel to Korea for the 2018 season. Instead, the team has chosen to misrepresent the situation by making misleading statements to the media."

Despite his fallout with the Giants' front office, Lindblom said he and his family will always hold the fans dear to their hearts.

"These unfortunate events will not change the memorable experiences we have had with you and the city of Busan," Lindblom said. "Over the last three years, you have become an important part of our family. You will always have a special place in our hearts."

The Giants countered that they negotiated with Lindblom in good faith and claimed they never brought up matters related to Monroe's health or money in the media.

"We clearly understand that Lindblom is loyal to Lotte and our fans," a Giants official said. "We hope he understands that we really value him as much as anyone."

Lindblom has been a fan favorite in Busan thanks to his performance on the mound and charitable efforts off the field.

Lindblom made 12 starts this year, going 5-3 with a 3.72 ERA as the Giants rode a second-half surge into their first postseason since 2012. 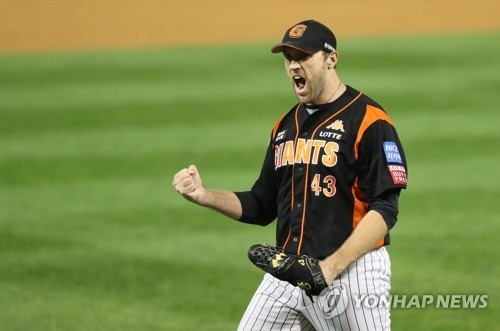