SEOUL, Dec. 11 (Yonhap) -- The government said Monday that it will expand a second startup complex near Seoul in a bid to further boost promising local startups and attract foreign companies.

The "2nd Techno Valley" in Pangyo, just south of Seoul, is designed to nurture some 1,400 startups, offering workspace and consulting services for funding at cheap prices, according to the finance ministry.

Pangyo -- South Korea's answer to Silicon Valley in the U.S. -- is already home to many technology companies, including NCsoft Corp., a leading game developer.

The second Pangyo Techno Vally will nestle on a 440,000-square-meter lot with its construction to be finished by 2022.

Finance Minister Kim Dong-yeon said the country's every sector and every company needs innovation to tide over cutthroat competition.

"The finance ministry will take a set of support measures, including a new tax system and budget, to help nurture startups and lead innovative efforts," Kim said at an economy-related ministers meeting in Pangyo.

The government wants the new startups complex to create new value and jobs through innovation, instead of having employees competing against each other over existing jobs.

Many South Korean university graduates, however, still opt to join Samsung, Hyundai and other big-name conglomerates rather than taking risks and starting their own businesses, mainly because failure carries harsh social stigma and makes it hard for a person to rebound and move on.

The South Korean version of Silicon Valley crossed the 70 trillion won (US$60.4 billion) line in gross sales for the first time in 2015.

The number of companies operating at Pangyo Techno Valley reached 1,121 as of the end of 2015, up 119 firms or 11.9 percent on-year. Their total sales recorded 70.27 trillion won, also up 1.3 percent from a year before, according to the Gyeonggi Institute of Science and Technology Promotion report. 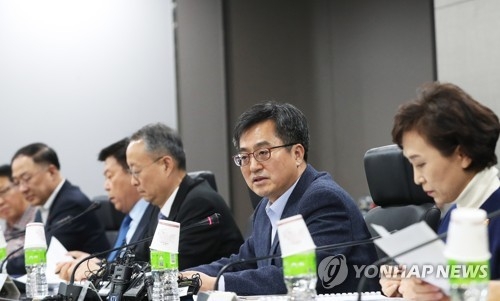