The ITC recommended to U.S. President Donald Trump on Dec. 4 a 50 percent tariff rate on large residential washers built by Samsung and LG and exceeding a quota of 1.2 million units, saying the South Korean washers were having an adverse impact on the domestic U.S. industry.

Whirlpool had demanded a flat tariff rate of 50 percent on all units, along with quotas on imported parts. Samsung and LG countered with a proposal of a 50 percent tariff on units exceeding a quota of 1.45 million.

The extra tariffs would apply only to Samsung and LG washers manufactured overseas, not in South Korea.

If approved, it will be the first such action since 2002 when the George W. Bush administration imposed an 8-30 percent duty on imported South Korean steel.

The ITC expects the additional tariffs will reduce imports of South Korean washers by half to help U.S. domestic manufacturers increase sales and the price of their products, according to the sources.

The ITC did not approve the request by Whirlpool to impose 50 percent tariffs on all imports, citing concerns they will serve as an excessive burden to U.S. consumers and distribution channels.

It also dismissed the request by Whirlpool to restrict imports of washer parts.

Also dismissed was the request by Samsung and LG to levy the tariffs on imports exceeding 1.45 million units.

The ITC hoped the upcoming tariffs would not undermine the plans by Samsung and LG to build assembly lines in the U.S.

The two companies exported a combined $1 billion worth of large residential washing machines to the U.S. last year, holding 16 percent and 13 percent, respectively, of a market that is led by Whirlpool with 38 percent. 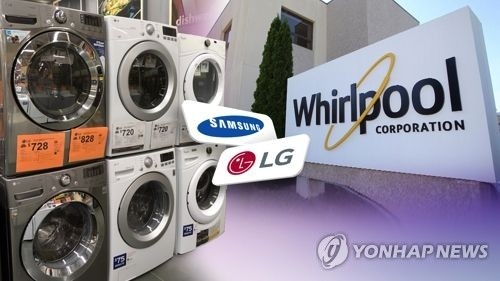