Choo Mi-ae's visit as the chairwoman of the South Korea-Russia Interparliamentary Council is part of her initiative to support the government's efforts to strengthen diplomatic and economic ties with major countries, including the United States, China and Japan.

"Russia has recently been keeping close economic cooperation with our country, and bilateral diplomatic relations at a parliamentary level have also been being strengthened," she told reporters before departing. 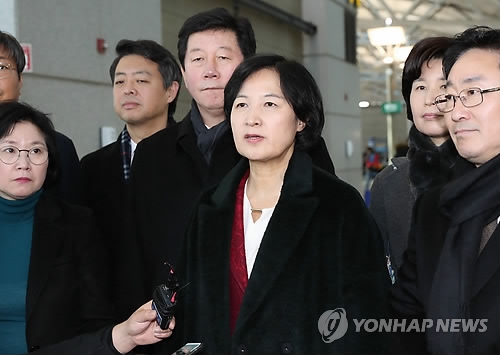 "As Russia is part of international collaboration in resolving the North's nuclear threat, I will try to create opportunities for cooperation (on the issue)," she added.

During her talks with Volodin, the speaker of the lower house of Russia's parliament, Choo is expected to seek enhanced cooperation between their legislatures in ensuring peace on the Korean Peninsula and expanding bilateral economic exchanges, her aide said.

At her meetings with Trutnev and Galushka, Choo plans to seek cooperation in pushing for a free trade agreement between South Korea and the Russia-led Eurasian Economic Union, a customs union consisting of Russia, Armenia, Belarus, Kazakhstan and Kyrgyzstan.

Choo is also set to meet Russia legislators to explore ways to ensure practical cooperation between the countries' legislatures.

She, in addition, will hold talks with South Korean businesspeople operating in Russia to listen to their difficulties and meet with leaders of Saint Petersburg to call for their active support for South Korean companies.

She is also to use her visit to encourage Russian athletes to compete in the 2018 PyeongChang Winter Olympics as neutral individuals, despite a ban on Russia competing over its state-sponsored doping.

Choo recently visited the U.S. and China. She plans to visit Japan early next year.