The Korea Baseball Organization (KBO) team said Lindblom agreed to a one-year deal worth US$1.45 million. The 30-year-old will be entering his fourth KBO season; he'd spent the first three with the Lotte Giants. 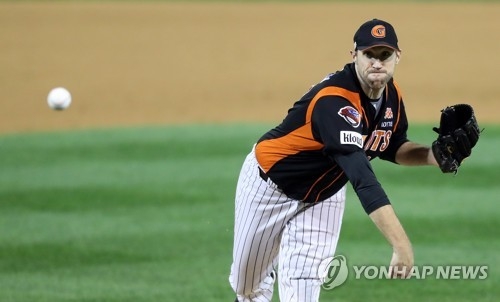 The contract talks between Lindblom and the Giants fell through last week. And only hours before the Bears made their signing official, Lindblom tweeted a message to his fans -- both in Korean and English -- accusing the Giants of "dishonesty and unprofessionalism" in their approach at the negotiating table.

Lindblom was the Giants' ace for 2015 and 2016. He returned to the United States to better take care of his daughter Monroe, who was born with a heart defect, but rejoined the Giants in July this year. He was 5-3 with a 3.72 ERA in 12 regular season games, and made two postseason appearances, too.

Lindblom's signing means the Bears have bid adieu to Nippert, who has been the team's top starter since 2011.

KBO clubs are each allowed a maximum of two foreign pitchers. The Bears signed another American hurler, Seth Frankoff, on Sunday.

Nippert, the 2016 KBO regular season MVP, earned $2.1 million in 2017 when he was 14-8 with a 4.06 ERA in 30 starts. Though still solid, these numbers weren't nearly as impressive as those from his MVP-winning season, when Nippert was 22-3 with a 2.95 ERA in 28 appearances. Nippert was also shaky in the postseason this year, as the Bears failed to win their third straight title.

The Bears initially sought to retain Nippert, 36, but at a much lower price tag. And to work around a rule on re-signing foreign players, the Bears at first told the KBO they wouldn't retain Nippert and then started their negotiations with the pitcher from scratch.

If a club informs the league office of its intention to re-sign a foreign player, then the team must offer him a salary worth at least 75 percent of his previous wage. 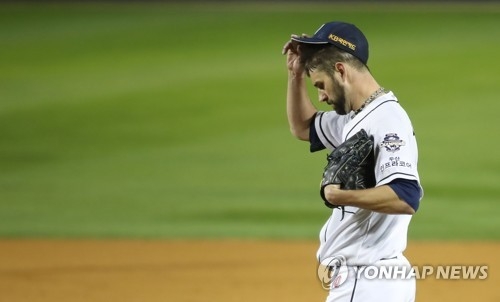 In Nippert's case, the Bears would have had to offer him at least $1.57 million, and the club balked at the figure.

And because the Bears said they initially had no intention of retaining Nippert and their talks broke down anyway, Nippert is now a free agent, eligible to sign with any KBO club. If the Bears had shown an intention to re-sign him and they weren't able to agree to terms, then Nippert wouldn't have been allowed to sign with any team in South Korea for five years.

Following the Bears' acquisition of Lindblom, the Giants, the NC Dinos, the Samsung Lions and the KT Wiz each have an open spot for a foreign pitcher. The LG Twins are trying to bring back two pitchers from last season, David Huff and Henry Sosa.