During their meeting in Seoul, Vice Foreign Minister Cho Hyun told Special Rapporteur Tomas Ojea Quintana that South Korea will cooperate with the U.N. official, commending him for his efforts to muster international cooperation in the North Korean human rights front, the Ministry of Foreign Affairs said.

The special rapporteur stressed the importance of his latest visit to South Korea, which comes amid unusual difficulties in fact finding on the North Korean human rights issue and shared the view that the acute tension on the Korean Peninsula warrants a balanced approach on the concerned issue, according to the ministry.

Quintana is visiting Seoul for a four-day stay till Thursday. It is his third visit to South Korea since taking office in August 2016.

The official is scheduled to meet with government officials and interview North Korean defectors. 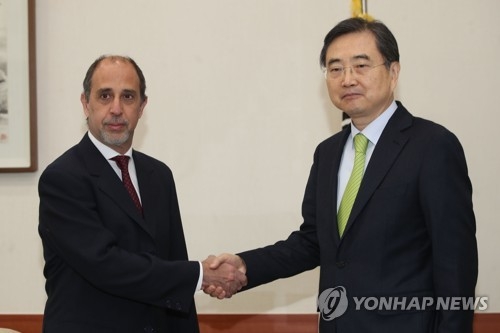