SEOUL, Dec. 11 (Yonhap) -- South Korea is considering banning all kinds of cryptocurrency transactions in the country as a way to cool down the worldwide craze for digital currencies, the top financial regulator said Monday.

"I don't see bitcoin transactions as financial deals," Financial Services Commission (FSC) Chairman Choi Jong-ku said in a luncheon meeting with reporters. "They are not institutionalized transactions. So the authorities never allow futures trading of such currencies."

He said the FSC is mapping out measures to restrict the transactions to some extent, including an all-out ban, adding that the restriction is aimed at minimizing side effects of Bitcoin transactions and reducing speculative investment.

Cryptocurrencies, such as bitcoin and ethereum, have rapidly gained popularity in recent years, and South Korea is home to one of the world's largest bitcoin exchanges, with about 1 million people estimated to have the best-known digital currency.

Despite a boom in transactions of digital currencies, such exchanges are largely unregulated, as they are not recognized as financial products. Also there are no rules protecting people who invest in digital money.

"Related government agencies are working on (the issue)," Finance Minister Kim Dong-yeon said in a meeting with reporters. "We are looking at how to protect investors, and at the same time we are reviewing (measures) to regulate (the digital currency)," he said. 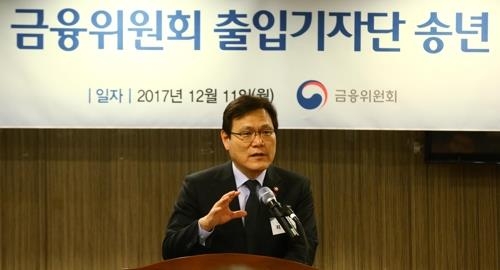