CHIBA, Japan, Dec. 11 (Yonhap) -- South Korean and North Korean female football players were not the only ones to go toe-to-toe at a regional tournament here on Monday, as supporters from both sides also engaged in some competition in the stands.

South Korea and North Korea played their second match at the East Asian Football Federation (EAFF) E-1 Football Championship at Soga Sports Park in Chiba, Japan. South Korea suffered a 3-2 loss to hosts Japan in their opener on Friday, while North Korea collected a 2-0 win against China on the same day.

The inter-Korean clash in Chiba was the 19th of its kind. It was also the first time since Feb. 29, 2016, that the two sides went head-to-head in Japan.

They had last faced each other in April this year. But at the time there were no South Korean fans, as the qualifying match for the 2018 Asian Football Confederation Women's Asian Cup was held in Pyongyang.

At Soga Sports Park in Chiba, North Korean fans outnumbered South Koreans in the stands. More than 300 North Korea supporters, who are believed to be members of Chongryon -- a pro-North Korean group in Japan that has maintained close ties with the communist regime -- occupied the southeast section of the stadium, while there were only about 10 in the South Korean supporters' section. 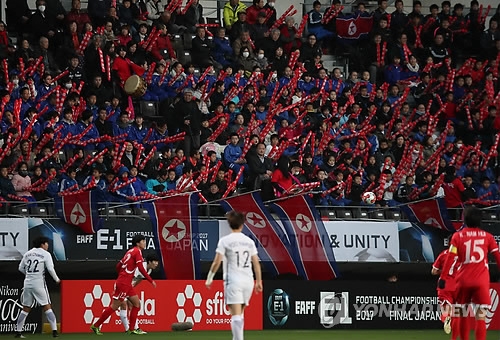 North Korea fans also displayed more banners than South Koreans, showing messages that read "attacking game," speed," and "victory." From the South Korean side, there was only one banner that read "we're always with you."

Despite being outnumbered, the South Korean supporters were still very loud.

Playing drums, a small group of South Korean supporters, also known as "the Red Devils," chanted "Daehanminguk," literally meaning Republic of Korea in Korean. North Korea supporters, on the other hand, shouted "Piseung Joson," meaning "North Korea to the victory," in Korean, while hitting their balloon sticks together.

"It's a pity that many South Korean residents here couldn't come since most of them had to work at this time," said South Korean supporter Baek Chang-hyun, who came from Seoul. The inter-Korean match started at 4:10 p.m.

Baek, 32, however, said he was confident that his side could give more energy to players on the pitch.

"We're not worried about what North Koreans do," he said. "I believe our supporters' power is stronger than them. We just hope South Korea can win against North Korea this time."

South Korean women have an inferior head-to-head record against North Korea, with one win, three draws and 14 losses. They are undefeated in the last two matches, though, with back-to-back 1-1 draws.