SEOUL, Dec. 12 (Yonhap) -- South Korean President Moon Jae-in is set to visit China this week for a bilateral summit with his Chinese counterpart that is widely expected to focus on ways to peacefully end North Korea's nuclear ambitions and repair the Seoul-Beijing relations that soured over the deployment of the THAAD U.S. missile defense system in South Korea.

The South Korean leader will head to Beijing on Wednesday for a four-day state visit that will also take him to China's southwestern city of Chongqing. He and Xi Jinping will hold their third bilateral summit Thursday. The two earlier met on the sidelines of the Group of 20 summit in Germany in July and the Asia-Pacific Economic Cooperation forum in Vietnam last month. 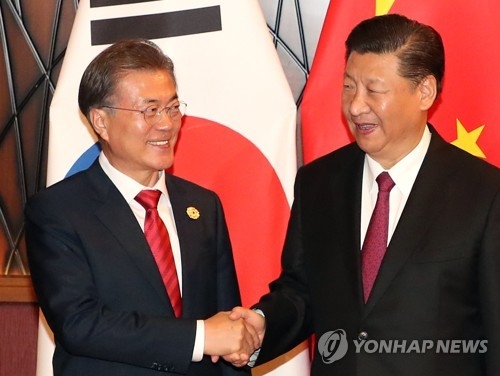 North Korea and its evolving nuclear and missile technologies will again top the agenda of the Moon-Xi meeting, which follows the communist state's latest missile provocation staged Nov. 29.

"The two leaders are scheduled to hold in-depth discussions on ways to peacefully resolve the North Korean nuclear issue and establish peace on the Korean Peninsula," Nam Gwan-pyo, a deputy director of the presidential National Security Office, said earlier.

Pyongyang has staged 11 missile tests since Moon took office in May. The reclusive regime also conducted its sixth and most powerful nuclear test so far on Sept. 3.

Moon was widely expected to ask China, the North's largest communist ally, to do more to rein in the North's nuclear ambitions.

To Moon and his country, however, the upcoming meeting may represent a rare opportunity to mend ties with their Chinese counterparts.

The Seoul-Beijing relations remained at their lowest ebb as China strongly protested South Korea's decision to host the U.S. missile defense system in the wake of North Korean provocations.

In a joint statement issued Oct. 31, the countries agreed to put the THAAD issue in the past and normalize their bilateral ties.

Many South Koreans believe China has yet to remove its de facto economic sanctions against South Korea.

"President Moon's state visit to China is expected to be an opportunity for the countries to normalize their bilateral ties in earnest by repairing the trust between the two countries and deepening the friendship between the two leaders," Nam has said. 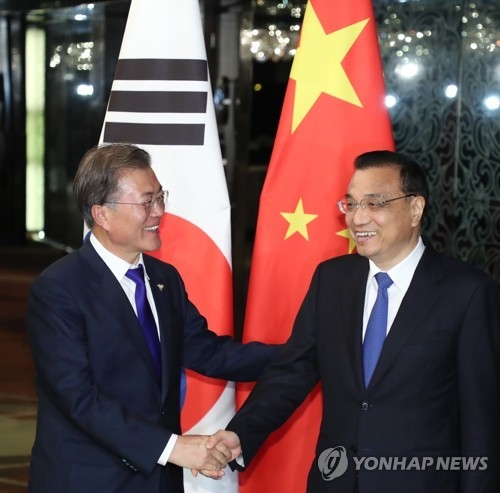 Top officials from dozens of leading South Korean companies will accompany the president on his visit to China in an apparent bid to mend their own ties with their Chinese counterparts.

They include the chairpersons of SK, Hanwha, Doosan and LS groups, along with top executives of Samsung, Hyundai Motor and LG, according to Cheong Wa Dae officials.

On Friday, Moon will embark on a two-day visit to Chongqing, which is at the center of China's One Road, One Belt development initiative and is home to many prominent business operations of South Korean companies, including Hyundai Motor.

The South Korean president will also meet with a number of Chinese leaders while in Beijing, including Chinese Premier Li Keqiang and Zhang Dejiang, the chairman of the Standing Committee of the National People's Congress, roughly the equivalent of a parliamentary speaker in other countries, according to Cheong Wa Dae.

He will return home Saturday.

Moon due in China for summit with Xi over N. Korea, bilateral ties

Moon due in China for summit with Xi over N. Korea, bilateral ties