SEOUL, Dec. 11 (Yonhap) -- Cold wave warnings were issued Monday for some areas of Gangwon Province and Gyeonggi Province, as temperatures are expected to drop further to as low as minus 17 C in Gangwon and minus 12 C in Seoul.

The Gangwon Meteorological Administration said it is upgrading the cold wave advisory for such mountainous regions as Yanggu, Inje and Cheorwon to a warning as of 10 p.m. Monday as the mercury is expected to fall to as low as minus 17 C Tuesday. Highs will be between minus 10 to zero C, it said.

The Seoul Metropolitan Office of Meteorology also issued cold wave warnings for Paju, Uijeongbu and four other northern Gyeonggi Province regions. It was the first time that such a warning has been issued for these regions this winter, officials said.

Cold wave advisories were issued for 13 other regions, officials said.

Weather officials said the mercury is expected to drop to around minus 15 C in Gyeonggi Province, with highs expected to be remain below freezing point.

Officials said Seoul will also see temperatures fall to minus 12 C, but wind will make it feel even colder. 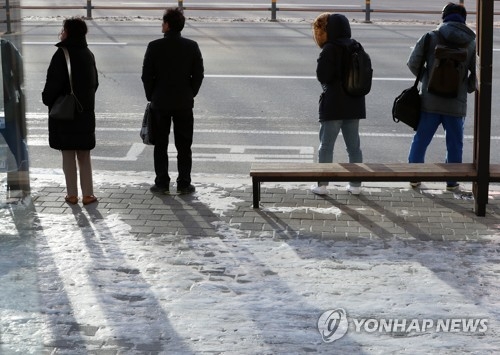