YEOJU, Gyeonggi Province, Dec. 11 (Yonhap) -- The city of Yeoju on the Namhan River, an upstream branch of the Han River, which bisects Seoul, offers many tourist attractions that one can easily access within around an hour's travel from the South Korean capital.

Part of the Baekje Kingdom (18 B.C. - 660 A.D), which used to stand in the midwestern region of Korea during the Three Kingdoms period, Yeoju was transferred to the Koguryo Kingdom (37B.C.–A.D.668) in 475 before being claimed by the Silla Kingdom in 550.

The strategically important region around the Namhan River, previously a county, was elevated to the level of city in 2013.

One of the most popular tourist attractions in Yeoju is Silleuk Temple, a rare Korean temple located by a river. Due to this, the temple exudes an air of openness and gives it the impression of being strongly associated with people's livelihoods.

The first thing visitors like to do is take a look at Gangwolheon Pavilion, which commands a beautiful view of the river. It is a place to let go of the stress and pent-up worries of daily life.

Visitors can stay at the temple overnight or longer to experience Buddhist culture and monastic life and to have an opportunity to think over their lives. Temple stays allow visitors to experience the unique characteristics and teachings of Korean Buddhism while sharing food and lodging with the resident monks. 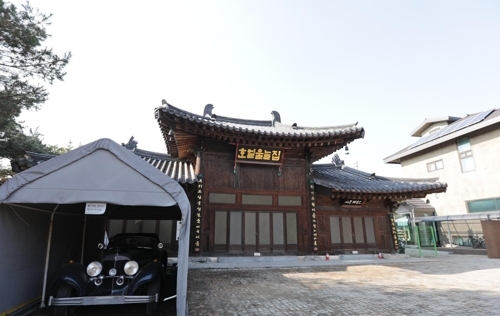 During a trip to Yeoju, a sailboat tour on the river is a strong recommendation. For 6,000 won for an adult and 4,000 won for a child, tourists can enjoy riding on the river aboard a yellow-sailed "Hwangpo Sailboat," which allows them to view the city's main attractions, including Silleuk Temple.

In Yeoju, a major commercial city in the 1392-1910 Joseon Dynasty, the sailboat was used to transport commodities including logs from nearby Gangwon Province.

Built in 2005, the wooden boat can carry up to 49 people and is an authentic replica of the original Joseon craft.

Yeoju is also known for producing high quality of Korean celadon. In order to get a better idea about the city's ceramics, a visit to Ceramics World, a complex of ceramics shopping malls, provides tourists with an opportunity to make and purchase the traditional pottery.

During a visit to the complex located near the Silleuk Temple, visitors can take part in a workshop where they use a potter's wheel with the help of Korean potters. The workshop is part of a hands-on program to learn about the making of traditional Korean pottery.

At the complex, Korean celadon made in both traditional and modern ways are on display. 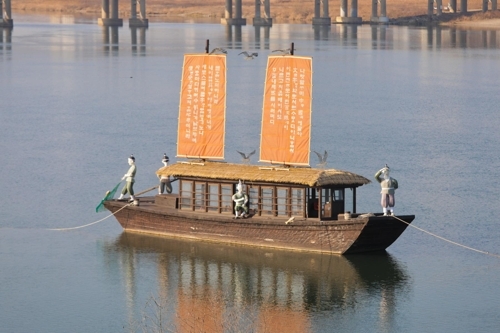 The Mok-A Museum is another of the must-visit places in the city. The museum, designated as intangible cultural asset No. 108, was established with the purpose of inheriting and developing traditional Buddhist art and traditional woodcraft techniques.

Located in Gangcheon-myeon in the city, the museum has a peculiar appearance that manifests the Three Treasures of Buddhism, which consist of Buddha, his teachings and the followers of Buddhism.

The museum is modeled on an Indian cave temple and built to show the tradition of Buddhism and its modernization.

Many exhibitions on traditional culture are held around the year at the museum. 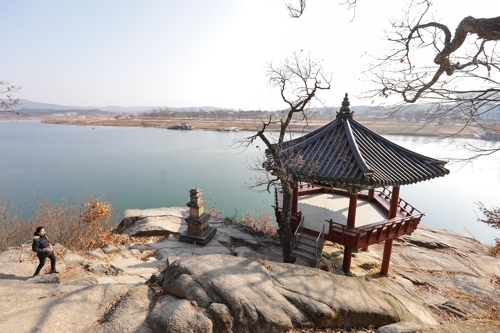 The train service, which links Pangyo in Seongnam, just south of Seoul, with Yeoju, whisks a visitor to the city in just 49 minutes. The best station for the city on the Gyeonggang Line is either King Sejong Station or Yeoju Station.

Yeoju, along with the nearby city of Icheon, is also known for its excellent rice. Rice produced in the region was said to be a tribute to kings for their meals in the Joseon Dynasty.

Many restaurants in the city offer cuisine featuring Yeoju-grown rice.

If a visitor is interested in natural ingredients and cooking without artificial flavor enhancers, it is highly recommended they have a meal at a restaurant in the city specializing in temple food. The city is home to many restaurants that serve Korean food for monks and has no artificial flavorings.

Historical city of Yeoju on the Namhan River fascinates visitors

Historical city of Yeoju on the Namhan River fascinates visitors