"I knew it was going to be a difficult match, but it's sad that we couldn't show what we've prepared," Yoon said after the match. "North Korea's strong stamina and speed made life difficult for us."

Yoon said it was also a pity that his players lacked concentration when trying to win the second ball. The coach emphasized that South Korea especially need to improve on that aspect before entering the Asian Football Confederation (AFC) Women's Asian Cup next year.

"We had a tough time winning the second ball," he said. "Like we did against Japan, the players lost the ball quickly after they earned possession."

Yoon also pointed out that South Koreans need to handle being pressed hard by their opponents.

"I don't think this is a temporary problem," he said. "It's something our young players also need to work on. In order to solve this problem, our players need to think quickly and get a good view of the pitch before making decisions."

With their two losses, South Korea are out of contention at the four-nation tournament. But Yoon said they'll try to wrap up the E-1 Football Championship on a positive note by beating China, their final opponents, on Friday.

"We have no room left to go back in our final match," he said. "We'll regain our stamina by Friday. Since China recently hired a new head coach, their players should be motivated, but we'll try our best to get a good result." 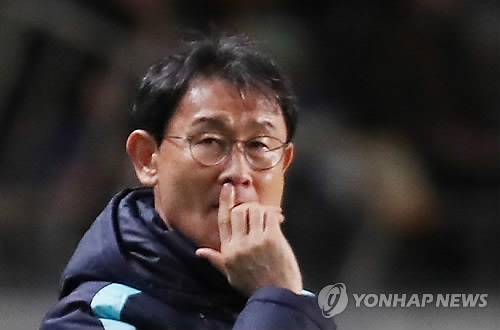