With the latest result, North Korea improved their superior head-to-head record against South Korea to 15 wins, three draws and one loss.

Kim said North Korea also washed away the painful memory a game in Pyongyang in April, when they were held to a 1-1 draw by South Korea and eventually failed to qualify for the 2018 Asian Football Confederation (AFC) Women's Asian Cup. At the continental qualifying campaign, both South and North Korea were tied in points, but the South had a better goal difference, which enabled them to win the group.

"After the April match, we were determined not to repeat that result again," Kim said at the post-match press conference. "After training for eight months since then, our players' performance got better and I think we won today with strong mentality and teamwork."

Kim said his players were ready to beat South Koreans, as all of them felt that the result in April was heartbreaking.

"Our players apparently looked like they were not satisfied with scoring one goal (against the South)," he said "Although we didn't have national team training regularly, all the players knew what they had to do with their respective clubs."

South Korea failed to produce any serious threat against North Korea, recording only one shot throughout the game. Kim said the South Koreans were different from what they had been in Pyongyang in April.

"I really don't know why the South Koreans performed like that," he said. "But I felt that South Korean players seemed to be daunted by the atmosphere created by our players."

Kim's team now have a shot at winning their third consecutive regional crown. He said it was good to see his players make progress.

"Our players are young and they didn't show their best talent in the opening match," he said. "But today, they were different. As they were determined not to repeat the same result from April, they showed what they can do." 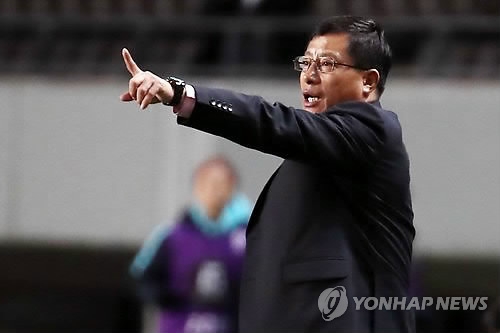