SEOUL, Dec. 12 (Yonhap) -- The Cabinet was to approve 50.5 billion won (US$46.3 million) Tuesday in additional expenses to be paid to a Chinese salvage firm for raising the sunken ferry Sewol and for a planned operation to put the vessel in an upright position for an additional search.

Shanghai Salvage had agreed with South Korea's government to lift the ferry Sewol for 91.6 billion won, but since raising the vessel in March, the company has demanded an additional 100 billion won, saying it cost much more than expected to raise the ship that sank off the south coast in 2014.

The two sides have since negotiated the additional amount to be paid.

On Tuesday, the Cabinet planned to approve 32.8 billion won in additional expenses to be paid to the salvage firm. But officials said that actual payment will be made only after the completion of an ongoing investigation into whether the firm deliberately dragged its feet in the operation.

The Cabinet was also to authorize 17.6 billion won for an operation to put the raised vessel, which has been lying on its side, in an upright position for an additional search for the five people still missing in the deadly sinking that left more than 300 people, mostly high school students, dead.

It is one of the worst maritime tragedies in South Korean history. 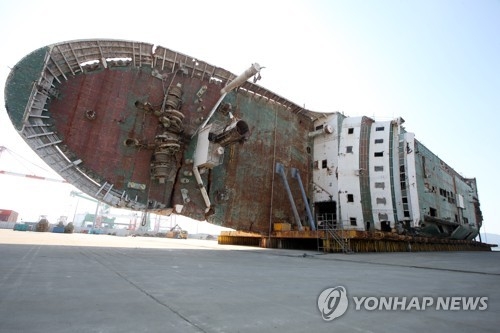