The 8th Conference of Munitions Industry opened in Pyongyang on Monday to review "the achievement and experience" of the munitions industry and to discuss "measures for ushering in a heyday" of the defense industry, the Korean Central News Agency (KCNA) said in its English and Korean coverage of the conference.

North Korean leader Kim Jong-un attended the conference on Monday, along with Thae Jong-su, vice chairman of the Central Committee of the Workers' Party of Korea, according to the KCNA reports. They also said it was attended by contributors to the launch of the "intercontinental ballistic missile" Hwasong-15, which the country fired on Nov. 29.

In his presentation at the conference, the party official said North Korea has confidently joined the ranks of global nuclear and military powers thanks to leader Kim's patriotism and "undaunted spirit of offense."

Thae also said the defense industry should continue to strengthen the state nuclear force quantitatively and qualitatively, the reports said.

"North Korea has laid the solid material and technical ground in the nuclear weapons research field to produce any kinds of strong nuclear weapons," Thae claimed. "A breakthrough has been made for the development of strategic weapons, having researched and completed the production of cutting-edge technologies and materials, which had been the exclusive property of the countries claiming to be military powers in the rocket sector."

Referring to the leader, the vice chairman also said "Kim Jong-un set forth the strategic line of simultaneously pushing forward the economic construction and the building of nuclear force and provided a legal foundation for bolstering up the nuclear force."

"This became as a historic turning point in putting the DPRK on the position of a matchless nuclear weapons state and hastening the final victory in the showdown with the U.S.," he added, using the abbreviation for the Democratic People's Republic of Korea, the North's official name.

Thae also talked about the Nov. 29 long-range missile launch, saying that it "is the great victory of the nation, a great event to be specially recorded in the history of the country ... in efforts to carry out the historic cause of completing the state nuclear force."

KCNA said the conference "goes on," indicating it may last longer than one day and possibly cover Kim's official remarks in the following days. 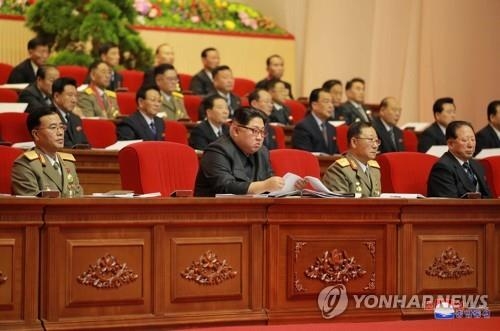