SEOUL, Dec. 12 (Yonhap) -- A former senior secretary to President Moon Jae-in rejected bribery allegations against him as a "misunderstanding" Tuesday as he appeared for arraignment ahead of a court's decision on whether to approve an arrest warrant for him.

"I will come out of this after sufficiently addressing the misunderstanding," Jun Byung-hun, a former senior political secretary, told reporters before heading into the arraignment at the Seoul Central District Court. "I will do my best to resolve the misunderstanding about me." 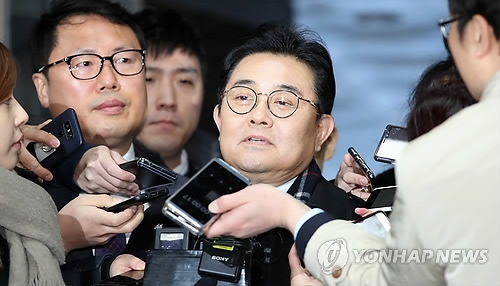 Prosecutors sought an arrest warrant for Jun last week on charges of forcing Lotte Homeshopping, a local home shopping channel, to donate 330 million won (US$303,700) in 2015 to the Korea e-Sports Association, of which he was then the chief.

Jun is also accused of receiving up to 8 million won worth of gift vouchers from Lotte Homeshopping and giving them to his family to use. He is suspected, too, of forcing another home shopping channel, GS Home Shopping, to donate 150 million won to the Korea e-Sports Association in 2013.

Prosecutors also charged Jun with embezzlement over suspicions that he received unauthorized salaries from the e-Sports Association when he was its honorary chairman and used the association's money to fund family trip expenses and pay the salaries of his parliamentary aides.

He is also accused of pressuring the finance ministry in July to set aside a 2 billion-won budget for a project led by the e-sports body.

It was the second time that prosecutors have sought an arrest warrant for Jun after the court rejected an earlier request last month, saying that the charges against him are disputable and that he has a low risk of fleeing or destroying evidence.

The court is expected to make a decision on the second request either late Tuesday or early Wednesday.
(END)