SEOUL, Dec. 12 (Yonhap) -- The leader of South Korea's main opposition Liberty Korea Party will embark on a three-day trip to Japan this week for talks with key Tokyo politicians on North Korea threats and bilateral relations, his aide said Tuesday.

Hong Joon-pyo will depart for Japan on Wednesday amid growing security concerns in both countries sparked by North Korea's persistent provocations, including the Nov. 29 test of an intercontinental ballistic missile.

Hong is expected to use the trip to advance his party's security agenda such as the redeployment of U.S. tactical nukes and stronger military cooperation between South Korea, the United States and Japan.

"We anticipate that Hong's visit will serve as an opportunity to further solidify cooperation between South Korea, the U.S. and Japan in resolving the North's nuclear threats and help allay the security concerns of the international community as well as our citizens," Chang Je-won, the party's spokesman, said.

During his visit, Hong plans to meet key politicians such as Fukushiro Nukaga, the Japanese chairman of the South Korea-Japan Parliamentarians Union, and Toshihiro Nikai, the secretary-general of the ruling Liberal Democratic Party.

Hong is also slated to hold talks with South Korean residents in Japan during which he will stress his commitment to defending free, liberal democracy, party officials said.

During the trip, Hong will be accompanied by top party officials such as policy chief Kim Gwang-lim, public relations chief Park Sung-joong, and his chief of staff Khang Hyo-shang. 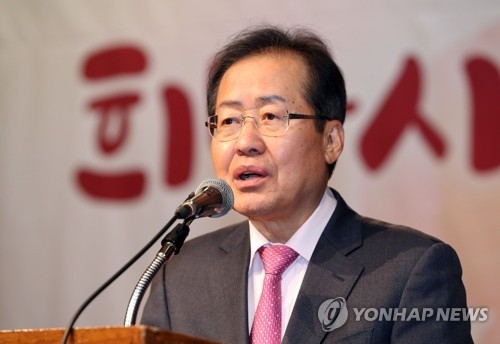