The exhibition, co-hosted by the National Museum of the Korean Contemporary History and the Korea Culture Center in Japan, will be held at an exhibition hall of the center from Dec. 20 to Feb. 10. 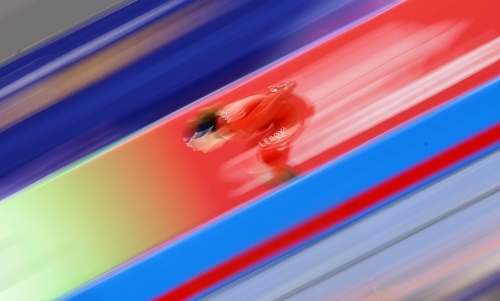 Some 70 photos from Yonhap News Agency and Japan's Kyodo News depicting the two countries' sports, history and nature will be put on display.

There will also be spaces for introducing two mascots of the PyeongChang Winter Olympics and each event of the forthcoming international sports meet and showing videos featuring promotional messages from the Olympics' honorary ambassadors.

The exhibition subtitled "Korea and Japan connect through photos" will consist of three parts. The first part will feature photos of athletes enthusiastically competing in Olympics and spectators cheering for their national teams. The second section will highlight the two countries' traditional culture and folk games and religions while the theme of the third part will be nature.

In September, Yonhap opened a joint photo exhibition with Kyodo and China's Xinhua News Agency as part of efforts to promote the 2018 Winter Olympics at the history museum in central Seoul. About 90 photos on areas ranging from politics to nature to sports are currently on display. The exhibit will run till March 18.